Tamolitch Blue Pool is a deep turquoise blue pool where the McKenzie River reemerges after going underground at the Carmen Reservoir. The hike to this gem in the Willamette National Forest is super easy at only 1.8 miles one-way with very little elevation gain. 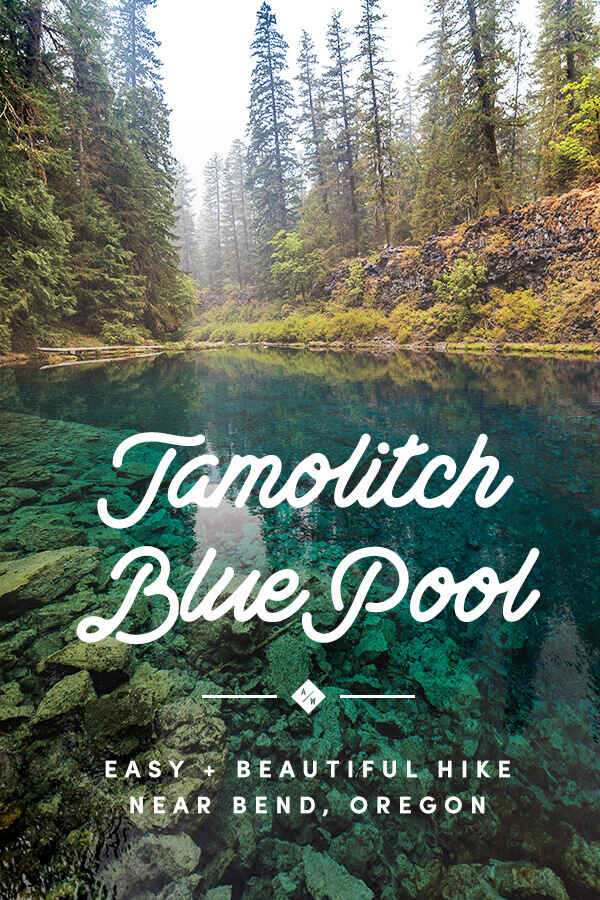 (Our visit to Oregon this past Labor Day weekend was unfortunately plagued by smoky skies from all the wildfires ravaging the state, resulting in the red-orange hues and smoky haze you’ll notice in these photos.)

Before we get to the hike, we need to nerd out for a sec about why this pool is so crazy blue. Essentially, the pool is deeper than it appears (over 30 feet at its deepest) and the water is INCREDIBLY pure. Why? Well, McKenzie River itself is already a pristine water source. Its headwaters are at Clear Lake, which is fed by runoff that is filtered in underground caverns for over 20 years before emptying into the lake. The river eventually runs into Carmen Reservoir and then goes underground for 3 miles and filtered again before reemerging at Tamolitch Blue Pool. The water is basically double-filtered and some of the purest water you will probably ever see. This is also why the pool is so cold – 37 degrees F!

We were on the trail by 9:30 am and it was a pretty quiet hike to the pool; we only saw two other people on our way there. The first half of the hike is through a dense, old-growth fir forest. There are a few Pacific Northwest-y bridges to cross until you end up next to the beautifully clear McKenzie River. This trail is actually just a section of the longer McKenzie River Trail.

As we kept hiking, we noticed the canyon getting higher, the trees thinning a bit, and the lava rocks everywhere.

The trek to the pool was a short one, we were greeted by the amazingly blue pool in under an hour, even with stopping to snap photos.

The pool really is as blue as it looks in photos – it’s pretty striking!

We decided to walk down to the bottom to see the pool up close and touch the ice cold water. If you follow the trail on the left it will eventually lead to the bottom. The final descent is a little steep and has loose dirt, but there are tree branches to grab onto on the way down if needed.

The water is SO clear that it’s deceptively shallow-looking. The far end of the pool is almost 40 feet deep and also the deepest blue.

We washed our hands several times and can confirm that the water is as cold as advertised. But this insane guy can probably give you a more accurate report of how the water felt…

He jumped into the pool off the cliff to the right! Then proceeded to yell expletives as he swam Olympic-swimmer status fast back to shore.

We should note that on our way back up the trail around noon, we saw a ton more groups making their way to the pool. A surprising amount of them had swim trunks and towels, so it must be a popular spot on summer afternoons. If you want a more peaceful, less crowded experience, go see this gem in the morning!

If you're planning on taking a swim, heed the warning signs at the trailhead: the water is ICE COLD and staying in too long could cause hypothermia.

This winter has been a doozy. Another cold week ah

Aspiring Wild is our space to write about and share photos of our adventures exploring the great outdoors. We currently live and play in beautiful Arizona, but often explore all over the Southwest and beyond. We hope you discover something here that will inspire you to go on an adventure of your own! Get to know us more

© 2021 Aspiring Wild.
Content + photos by us unless otherwise credited. Site design + code by us.